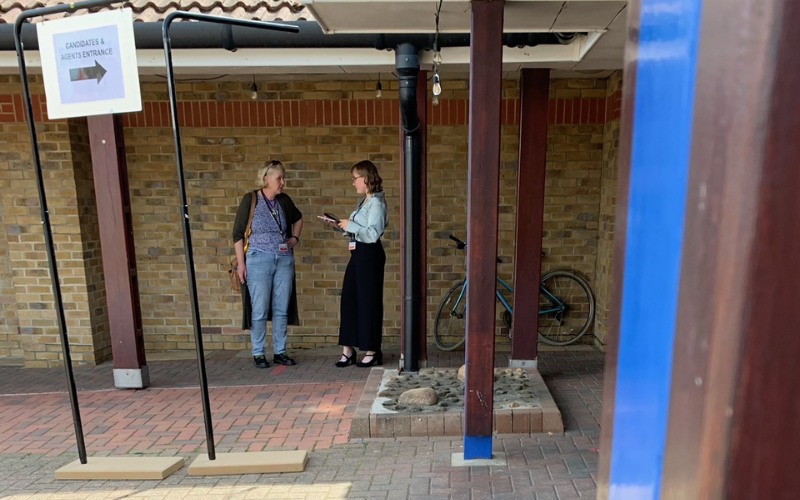 This year’s local elections were a key test of the national political mood, and trainees were on the frontline of reporting crucial vote counts in London and Greater Manchester.

The local elections on 5 May were a great chance for our trainees to put their reporting and public affairs lessons into practice, and in London, where every borough council was being contested, we had a trainee covering every single count.

What a night! It was incredible covering my first election for @SW_Londoner – and with such an exciting result! Definitely worth the sleep deprivation to see it all play out live. https://t.co/t26J3o3efb

Charlotte said: “The thing I probably enjoyed the most was meeting other journalists and getting a glimpse behind the scenes of some of the biggest British news producers.

“I met someone working for the BBC who produced clips for social media and the live blog as well as Jonathan Swain from ITV’s Good Morning Britain who broadcasted live from the election count.

“It was fascinating to see how they worked and talk to them about the historic night.”

As the results started to stream in, Charlotte was under pressure to relay information back to her editor in the newsroom.

She said: “My NCTJ training helped me especially at the end of the night when I was required to write a piece detailing the reactions to the Westminster results after having been up for around 12 hours.”

Stefan found the elections were a chance to step out of his comfort zone.

He said: “Being a sports journalist trainee, I felt pretty out of place standing amongst political reporters from Good Morning Britain and the BBC, but I tried my best to lean into the experience and chat to as many people as I could.

“Just being in the room with there being such a buzz around the count, was probably the best part of the entire thing.”

While attempting to get reactions from different party members, Stefan said his training came in handy.

He said: “Having gone through interview training during the NCTJ course, where we were taught how to probe without intruding and offending, I was able to connect with a couple of people I spoke to.

“Studying public affairs also helped contextualise what was going on in relation to the count and meant I had a much better grasp of the wider story threads at play during the night.”

BREAKING Liberal Democrats win a majority in #Kingston after 27 Lib Dem councillors are elected to the council!!

She said: “The opportunity to cover the local elections was one of the best experiences I have had since beginning my course at .

“At the beginning of the day I was a bundle of nerves and excitement, but I soon found my flow when I realised that every journalist in the press room was working together and willing to help each other.

“It was a perfect opportunity for me to gain confidence, network with other members of the press and grow my journalistic skill set. I had an amazing day!”

Holly described how she faced challenges when having to improvise and come up with interview questions on the spot.

Any advice on how to stay up for 27 hours is welcome here – overnight election coverage tonight and then straight to my full time job. Love the commitment!!!!!!

She said: “I enjoyed speaking to the councillors, especially when they won. It just showed me how much local democracy matters, and the passion some of them had for the places they live was really inspiring.

“The most challenging thing was the speed. One minute you’re sat waiting with nothing coming in and the next, you’re back and forth as the results start pouring in.”

Simran had to juggle live tweeting the results with sharing information with reporters back in the office, but said she enjoyed the experience of having to multitask.

Proud Journalism moment, delighted to have been reporting on Rochdale local elections yesterday.

Tom Holmes, deputy editor of South West Londoner and its sister sites, said: “Covering any set of elections, whether local or general, is always a fantastic experience for any trainee.

“They are thrown in the deep end and get to practice a lot of different and valuable skills in a high-pressure environment.

“The trainees did unbelievably well, producing lots of brilliant social media content and written stories and we’ve had fantastic feedback from them on the experience.”

He said: “Think like a journalist – if you do all the journalistic basics right, be that interviewing, finding the right line or just generally showing off your social skills, then you’ll be absolutely fine.”

The best way to learn how to become a journalist is by doing it. Have a go at being a journalist with our free journalism workshops, which you can sign up for here.

JournoFest 2022: Why journalism is more important than ever