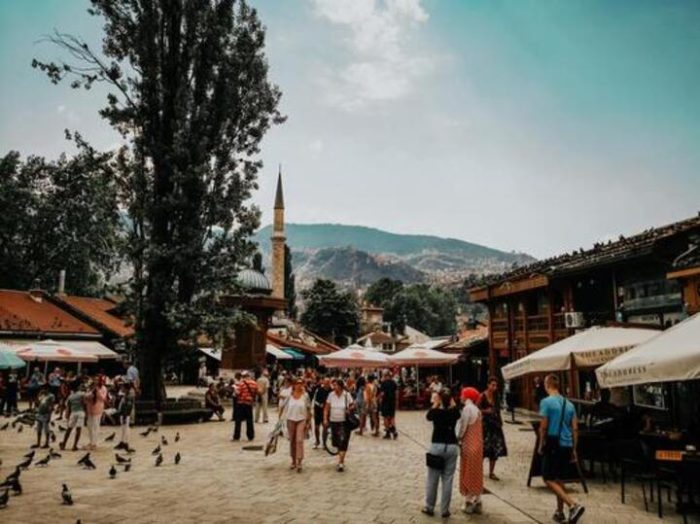 There are four main photojournalistic approaches to war following the realization that the traditional approach, while good for raising awareness, was insufficient in stopping violence.

Forensic photography contributes to justice after the violence, even if it cannot stop the violence. In participatory photography, the participants become agents of their own image and thus the process democratizing and emancipatory. Post-conflict and peace photography develops forward-looking perspectives. Aftermath photography the continuation of violence in memories, locating it in abandoned buildings, landscapes, and objects.

What is unique and, at the time, groundbreaking in Bosnia: Uncertain Paths to Peace is the reformulation of the relationship between the photographers and viewers. Thus, the authorial voice is challenged and audience participation is encouraged similar to modern internet-based media work.

At the time of their essay, photography and the visual medium was almost everywhere considered secondary to text. A pervasive double skepticism existed: about the images capability to tell a story without text, and about the ability of the audience to identify the intended story. Nevertheless, photographers were aware of the story-telling potential of images.

Bosnia: Uncertain Paths to Peace presents texts and images around locations in Sarajevo, the (Serb-dominated) suburbs and the (Bosniak-dominated) Old Town: The Suburbs and Sarajevo, respectively. The purpose of the project was to describe the making of peace and its problematic and possibility. Readers were encouraged to present comments to enable conversation between the parties, the photographers, the subjects, and the viewers.

Visiting the grids of the photoessay, the Suburbs Grid or the Sarajevo Grid, allows the viewer to construct their own narrative, but the curators invisible hand, evident in the construction of the grids, guides the viewer, as does the tradition of reading in the Western context. The sequence of viewing will inevitably create a some semblance of a relationship between the images, even if they might be spatially and temporally apart.

The authors poignantly compare the experience of navigating the photoessay site to the fragmented reality one might experience when entering, or living in Sarajevo and seeking to make sense of what is happening, with the crucial difference that the viewer can leave at any time while the residents of Sarajevo could not.

Although the openness of the project is its strength, not all users have appreciated it nor did it work for all towards reconciliation. The discussion groups, intended to foster engagement, quickly became dominated by racist vitriol – which also showed how long the process towards peace truly was. Moderation might have been required, but then, that might have undermined the goal of the project.

In conclusion, the authors discuss how the ubiquity of social media and sharing images as a form of communication makes a similar project with a goal of ‘being corrected by the people who lived through it’ nowadays plausible when it was in 1996 just barely realistic. Constructively engaging with these new forms of expression has become a core challenge for current photojournalism.

The article “Messiness in photography, war and transitions to peace: Revisiting Bosnia: Uncertain Paths to Peace” by Rasmus Bellmer and Frank Möller is in Media, War & Conflict. (open access).

A day in the life of a political journalist